Mission Beach is blessed with being the habitat of the endangered southern cassowary. Cassowaries can be spotted around Mission Beach walking through fields and paddocks, across roads, through resorts and often through locals’ gardens.

Listed in 1988, the Wet Tropics extends from Cooktown through Cairns and Mission Beach to Townsville and covers almost 900,000 hectares. Included are many national parks and state forests such as Licuala State Forest, near Mission Beach.

World Heritage areas are outstanding examples of the world’s natural or cultural heritage. The World Heritage Committee oversees world heritage listing on behalf of the United Nations Educational, Scientific and Cultural Organisation (UNESCO). Occupying just 0.2% of the continent the diverse rainforests around Tully and Mission Beach contain a large proportion of Australia’s plant species, including 65% of fern species. They provide habitat for over half the nation’s bird species, 60% of the butterflies and 36% of mammals Alongside stunning scenery Mission Beach contains stunning wildlife…

Mission Beach is blessed with being the habitat of the endangered southern cassowary. Despite being a bird, the cassowary is Australia’s largest land animal. It normally weighs about 60kg, but the heaviest recorded was a 94.5kg bird found north of Mission Beach in 1992. Females, which are larger than males, can reach 2 metres when stretched out to full height. Male cassowaries are the care-givers, sitting on the eggs for about 50 days until they hatch, and then looking after the chicks for around nine months.

Cassowaries can be spotted around Mission Beach walking through fields and paddocks, across roads, through resorts and often through locals’ gardens. During Cyclone Yasi much of the cassowary’s natural habitat and food resources were destroyed which has forced them to spread into urban areas more often. Malnourished, sick and injured animals are being rehabilitated at the Garners Beach Rehabilitation Centre just north of Bingil Bay.

Cassowaries are good swimmers and can cross deep rivers. They have been observed to go fishing by immersing themselves in water for around 15 minutes with feathers spread. They then emerge from the water, shake their plumage and eat their catch of fish!

Cassowaries are potentially dangerous and you should avoid taking unnecessary risks. The Environmental Protection Agency suggest the following guidelines to help protect cassowaries and ensure your safety:

Mission Beach Tourism is proud to be a Campaign Partner in the Save the Cassowary campaign launched Monday 17th March.

Rainforest Rescue has initiated the Save the Cassowary campaign in collaboration with the Zoo Aquarium Association and partner zoos, QLD Department of Environment He 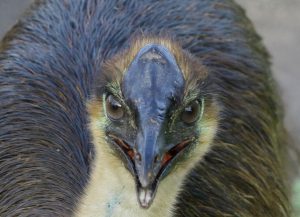 estimates fear fewer than 1,000 birds are left in the Australian wild.  Visit www.savethecassowary.org.au today for more information and to find out how you can help the Endangered Southern Cassowary.

Save the Cassowary blog 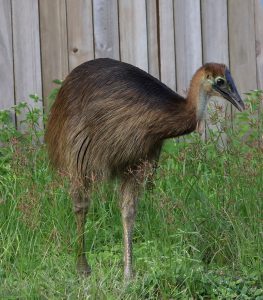 Find out about upcoming events in and around Mission Beach.
All Events